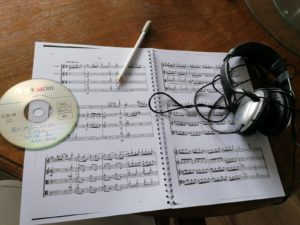 The EnAccord´s journey of discovering less-known stringquartet music has produced a treasure of beautiful and interesting repertoire. It´s nearly inevitable, that their celebrated CD “Capriccio” is now followed by another album. Again, the pieces vary in form and style, while the longer ones are interrupted by single “Visions Fugitives” by S. Prokoffief, in an arrangement by S. Samsonov. Remarkable are the stringquartets by Sirmen and Maconchy, two female composers, who were celebrated in their times but are now unfortunately forgotten.

“Visions” does not only refer to the capricious Prokoffief pieces, who hold de “pasticcio” together as a red line, but also describes the versatility of both the music itself and the stringquartet as a form.

We`d like to invite you on a personal discovery journey in our musical world of “Visions”.